We left Ft Benning GA in white chariots, large white buses with school bus interiors. My adrenaline soared as we drove out of the CRC (Continental Replacement Center) after a week of being “processed” there. I was thrilled to be leaving. As we bumped along the rough roads through the base, it occurred to me that military bases are separate sovereignties. They look like any other place with jack pines, asphalt roads, water towers, and stores, but I came to learn that military bases have unique and separate traditions, laws, and languages.

Perhaps most readily noticeable on the base is the communal living arrangement. I ate, slept, and showered with strangers. Most of them were strangers. My eleven Red Cross colleagues and I were drops in the bucket of 400 military, Department of Defense, Department of Army, and private contractor personnel that arrived at the CRC that week to be processed for deployment to various area of conflict overseas, referred to as “in theater” and “down range.” Most of us were headed for Iraq – Kuwait — Afghanistan. 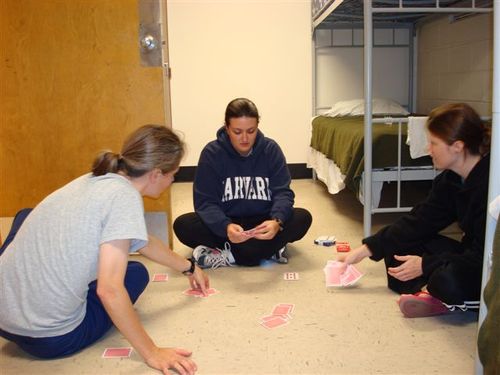 Our daily routine included morning and evening formations, meaning we lined up in four rows to hear announcements and to be directed to various processing stations. The cadre, young soldiers in charge of herding us, read off lists of who should go were. We were identified by the last four digits of our social security number. All week, I responded to a number. A cadre would yell the last four digits of my “social” and direct me to go to the SRP to input my ISSOP, then eat an MRE for lunch before reporting to the CIF. And I was supposed to understand that.

At TSIRT (Theater Specific Individualized Readiness Training) we were trained – one day the courses lasted thirteen hours – on first aid, explosive devices, hostage survival, the laws of land warfare, and sexual assault prevention and reporting. Our medical records were reviewed at the Med Shed. We had blood drawn for DNA records, we received vaccinations for a variety of maladies including anthrax, small pox, and the flu. Our vision was checked and females gave a urine sample for pregnancy testing.

We were shuffled through the CIF (Central Issue Facility), a massive warehouse, where staff pulled items off of a pick list for us. When I told my family that I would be issued everything a soldier gets except for the weapon, my brother asked, “Isn’t that the one thing you really need over there?” Our DCUs (Desert Camouflage Uniforms), three pairs of boots, body armor, a Kevlar helmet, a sleeping bags, a fleece jacket, a Gortex jacket, rain gear, socks, thermal underwear, a canteen, and a laundry bag were among the items pushed at us across a counter faster than we could stuff them in our duffels.

I had several questions during the process, but there wasn’t much time for discussion. The DCU’s are desert tans and beiges obviously to blend in with the landscape, but the duffle bags they gave us to store and haul all of this gear were still Army green. Why wouldn’t the bags be camouflage too? All in all, we were given enough gear to fill three bags, probably 120 pounds worth.

At the SRP (Soldier Readiness Preparation) site we received laminated identification cards with a tan checkered background and black lettering with a grainy black and white photo. The result looks like a WWII spy ID card. So far this is going to be my favorite souvenir from this assignment. The days were long as we repeated the same routine: call to formation, divide into groups, and be shuttled or march to the designated destination. I use the term marched loosely. Our mostly nonmilitary group looked more like a dizzy caterpillar meandering down the road than a military unit moving out smartly.

We ate in the DFAC (Dining Facility) which was, as one might expect, like dorm food, or perhaps similar to summer camp. A large flat screen television projected the daily news and it was hard to ignore. While we were there we watched San Diego burning while we ate. Standing in line for breakfast, lunch, and dinner allowed me to met people who were also headed in theater, the military term used for primarily Iraq – Kuwait Afghanistan. One man from upstate New York is headed to Iraq to work for the company that staffs the PX on each base. He signed on so he could add a little to his retirement, maybe go on a cruise, and buy a large screen television set. Another man, David is an Assyrian born in Iraq. He has lived in the U.S. for many years and is an interpreter for one of the generals. He said the work is interesting, “too interesting when the general’s Black Hawk helicopter is being shot at.” The Assyrians are Christians and he said that Islam is not like the other religions because it advocates violence in order to convert people. He warned me to be careful around Tikrit because the people there are anti-American and really only like themselves.

I met another interpreter, a Kurd from Fargo North Dakota. He has lived there for ten years. I met dentists, a neurosurgeon, and a psychologist. Most people deploying out of this center are small replacement units or individuals or they are affiliated with contractors. The larger military units deploy out of another military base.

Much of our time at each processing station was spent writing the same demographic information on form after form: name, social security number, date of birth, category of service, destination, next of kin. The forms looked that they had been typed on a typewriter in the 1970s and never revised since and then copied on an ancient copy machine with a toner cartridge that deposits black speckles across the pages.

One of the highlights of the week was the packing party Red Cross staff held outside under one of pavilions. We dragged our duffels out and repacked the gear in a more organized manner than it was first stuffed in the bags. Three of our team members are former military members and they were a great help teaching us how to assemble certain critical pieces like the body armor. They also gave us a crash course in how to put on the gas masks, a detail not covered in any of the training we received from the CRC. Eventually, shortly before we departed, our packed bags were inspected by a K-9 unit for contraband. Fortunately none was found.

One of the most somber moments of the week occurred when we were given our dog tags. Someone asked why we wear two tags. A former military guy said rather glibly, “When you kick the bucket, they put one in your mouth and tie the other one to your toe.” There was lots of laughing. Someone said, “Not likely to happen.” But I couldn’t help think of the 3,000 servicemembers and civilians who had gone before us and ended up using those tags. I am not really afraid; the odds are really on our side, but still some people don’t come back. What were they thinking when they put those new shiny tags around their necks when they were being processed at the CRC?

The total loss of privacy and control or even influence over my daily schedule was difficult but it was probably necessary to get 400 people processed in a week. The frequent errors like shuttling us to the wrong destination or changing my gender to male on the last day were frustrating but also probably understandable given the small number of cadre and the 1970s sort of system that was employed to manage such large groups week after week.

One of my sisters asked me if I had signed on the wrong line. There were moments during this week when I wondered if I had. After the white buses collected us, we were transported to the airstrip and boarded a plane for Kuwait via Leipzig, Germany. We would be in Iraq 24 hours later.

Check out my pictures of this experience in the album. In a couple of days I will report on our arrival at COB Speicher in Tikrit, Iraq.