I ate my last meal at Ebbitt Grill, two blocks from the White House, reputedly the oldest pub in DC. White House staffers and tourists dine and drink amidst décor displaying Teddy Roosevelt’s hunting memorabilia: duck decoys, rifles, vests, mounted heads of a wide range of mammals. I had paella, a Spanish rice dish of seafood and sausage, and a delicious slice of peanut butter chocolate pie for desert.

After dinner, I wandered through Barnes & Noble. My biggest concern about deploying missing my family, friends, and dogs while I am in

Iraq
. My second biggest concern is missing wandering through bookstores and libraries. I eyed the shelves like a person destined to be ship wrecked on an island. What should I take? This was my last chance. 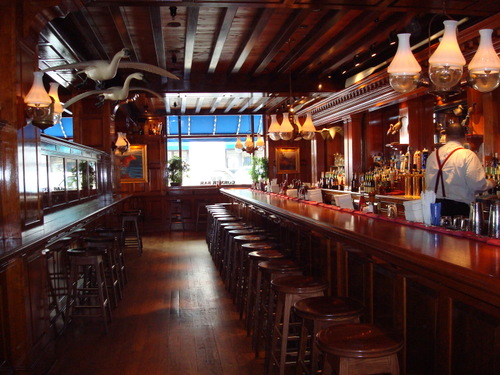 During our three weeks of training, we learned the policies and detailed computer and case work procedures for sending Red Cross emergency messages. Top notch instructors lead us through long days reviewing manuals and practicing on a training system. Eventually we were ready for the real world and we sat in the main Services to the Armed Forces call center next to seasoned veterans, who coached as we received emergency messages from family members at Red Cross chapters and state-side military bases. We verify the birth, illness, and death notifications with doctors, hospital staff, funeral directors, and law enforcement officials before passing the messages on to servicemen and women and their military commands. The amount of information we consumed was mind boggling. Each night I ate dinner and collapsed, thus the reason you haven’t heard much from me.

One of the first messages I took was from a proud mother who called us while she was still in the labor and delivery room. She eager for us to let her husband, a serviceman in

Iraq
, know he had new daughter. I took another message from a new soldier still in basic training. He had gotten word that his new wife had ovarian cancer. Another serviceman called from

Mexico
to tell us his mother had died while he was home on leave. He asked for help getting a request to his commanders to request extending his leave.

It was a lot of work, but not all work. Kris took time out from her busy school and work schedules to share the last weekend with me. We made the most of three gorgeous fall days. We saw the Hope Diamond at the Natural History Museum at the Smithsonian and admired the newer American Indian Museum, which is built with Kasota stone from

Minnesota
. The architecture is stunning including the surrounding fountains and gardens. Inside we discovered one of the best kept secrets and the Smithsonian, a cafeteria that showcases delicious, unique American Indian menu: corn tamales, rice and beans, salmon, buffalo burgers, and fry bread. http://www.nmai.si.edu/

A real highlight of our weekend together was a stroll through Madame Tussaud’s Wax Museum. I had no idea how realistic the figures could be. To be honest, it was creepy at first. I was standing next to Harry Truman, Winston Churchill, and Dwight Eisenhower, and I swear I almost expected them to talk. Kris posed next to Johhny Depp, Will Smith, and the Kennedys. Check out our pictures in the album section.

Our group also had the opportunity to tour the inside of the White House. We had access to the Red, Blue, and Green Rooms as wells as to the large gold State Dining Room. Having been home to

U.S.
Presidents since 1800, I was enamored with the history of the place and to know of all of the people that have walked through those doors. Cameras were not allowed so I don’t have any pictures.

After training concluded, we began several days of deployment briefings. Medical briefings, administrative briefings, public relations briefings, human resources briefings, and security briefings have redefined the word briefing for me. At the end of the week, twelve of us packed our bags and mailed ahead boxes.

In the bookstore, I picked up a map of Iraq, so when places are mentioned while I am over there, I can figure out where they are; a book about two British women living in Northern Iraq; the DVD “Nixon” (My hotel was only a couple blocks from the Watergate and I love anything staring Anthony Hopkins), and ironically a little book called “Journeys of Simplicity: Traveling Light.” The small work consists of the sparse list of belongings that people like Thoreau, John Muir, and Dorothy Day. I, too am limited in the luggage I can take, but it seemed paradoxical to add this book, but I couldn’t resist.

I walked back to the hotel through light rain. I encountered a code zero at the White House grounds that created two detours and caused me to have a less than pleasant encounter with a park police officer who I suspect has higher aspirations. But this is DC, and it emanates a rich history, glorious monuments, divine restaurants, lots of people, and crazy traffic.

Next stop: A week of “processing” at

GA
where I will set foot on a military base for the first time.