I was struck with an eerie feeling when I walked past the ruin of a tile fountain in on my way into an office building on base. COB (Contingent Operating Base) Speicher has been built on the remnants of one of Saddam Hussein’s most prized air force bases near Tikrit, his hometown. Hussein himself undoubtedly walked these same hallways and sidewalks. He was eventually captured along the Tigris River less than 20 miles from where I now live.

Until that epiphany, I had been busy finding the DAFC (dining facility), laundry, the PX (Postal Exchange – the military version of Wal-Mart on bases) and the post office on base. I needed to get patches sown on my uniforms, get access to the computers, and obtain my security pass. I had to learn to locate my CHU (Compartmentalized Housing Unit) in the LSA (Life Support Area) in the dark at 2 a.m. when my shift ends. The streets lights have been inactivated and most windows including the ones in my CHU and our office have been covered to prevent light from revealing locations, so it is dark, dark when I leave. The only light comes from the headlights on our white Ford Explorer, occasional flood lights usually being used for a night project, and the moon. I hadn’t had much time to think about where I am until now. 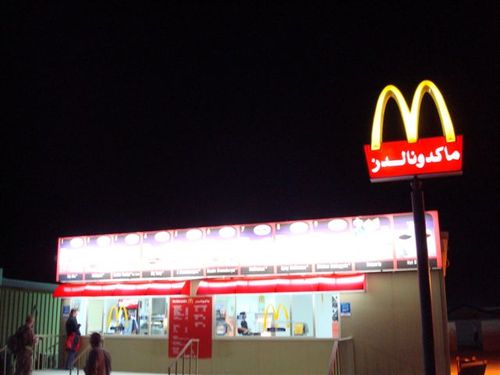 Two weeks ago, we left Ft Benning on a large commercial aircraft that was contracted for military use. It was strange flying with 230 people armed with M9s and M16s. I can’t imagine what that flight weighed with all of us, our duffels and weapons. The poor plane seemed to strain on take-off. After a six hour flight, we landed in Leipzig, Germany for a short break, which became longer when they discovered the need to replace a valve. Our flight to Kuwait lasted another six hours and after some obligatory military waiting, we took a bus to the military airstrip, where we were “processed” and manifested.

After six more hours and a cheeseburger and fries at the 24 hour McDonald’s on the Kuwait base, we took off on a C150, an open belly plane built and used during the Vietnam War. About twenty of us were strapped into the center of the plane. It was just like in the movies.

During the flight I got up to look out of the tiny porthole window. I knew this was my only opportunity to get a view of Iraq. Once we landed I’d be on the base the entire deployment. After all of the reading I’ve done and all of the news coverage, I wanted to at least get one glimpse of the country. One of the flight crew invited me up to the cockpit. What a view. The sand had been very white when we left Kuwait. In the portion of Iraq I saw, primarily the Tigris River bed, the sand was pale pink or light rust. I couldn’t help but think of all of the blood that has been spilled along that region since the beginning of time.

The Tigris River winds back and forth, sometimes gently but often at sharp angles. It is an ancient river that has been utilized extensively for irrigation. I could see neat, square fields. Still the landscape looked more like sand than soil. The rows in the fields looked like someone had neatly raked the sand like around a golf course green.

I felt euphoric as that plane approached Al Sahra, like an explorer, not that I was seeing something no one else had ever seen, but because it was new and foreign to me. Iraq was no longer the cliché’ it has become in the news, a war-torn street. It was a vast country of sand and two ancient rivers, the Tigris and Euphrates. A place of beginnings; perhaps, according to some, the very place of beginning of humankind. And I am there.

At chow (the term for all meals – breakfast, lunch and dinner don’t exist as such), my colleague Julie reminded me that long before Saddam Hussein walked where we are walking, others like Abraham may have. This brings to mind Milton’s Paradise Lost set in the Garden of Eden and thoughts of history repeating itself: our lives in the midst of angels and fallen angels.