I didn’t intend for this blog to be a travelogue, but in late October – only three weeks after returning from Paris and Vienna – I headed to Orlando, primarily for a business meeting. Fortunately, my recent travel companion, Marsha, came along to visit her brother and sister-in-law, who live in the area and we did a little sightseeing. We arrived a day before my meetings started and visited Disney’s Animal Kingdom. My interest in animals and habitat drew me to the park, despite the mixed feelings I’ve had about Disney over the years.

I cringed as a parent, watching my young daughter fall under the spell of the Disney Princesses. There were only five princesses in the 1980s when she was little: Cinderella, Snow White, Sleeping Beauty, Little Mermaid, and Belle from Beauty and the Beast. I felt a lot of competition with the Disney princesses and Barbie, who incidentally is seven months older than I am. We didn’t resemble each other when my daughter was young, and we resemble each other even less now. There ought to be a law that Barbie has to age like the rest of us. We deserve to see a 50-something Barbie!

I wanted to raise a strong, intelligent, thoughtful, resilient, compassionate young woman. The stories of women who exemplified these attributes: Florence Nightingale, Clara Barton, Rosa Parks, Amelia Earhart, Eleanor Roosevelt, and Rachel Carson couldn’t hold a candle to the glamour of the Disney Princesses with their sparkling tiaras and taffeta gowns.

All of my trepidation about Disney resurfaced as Marsha and I planned to visit Animal Kingdom. Despite my concerns, I have come to admire Disney’s reputation for first class guest services. Their facilities are clean and attractive; their staff is polite and exclusively focused on the needs of their customers.

So with this back-story, Marsha and I headed off to visit the 1700 animals, representing 500 species, in the 500-acre Animal Kingdom. According to Disney, it is the largest animal theme park in the world, and it is the largest of the Disney parks. We took the safari ride in a Land Rover-like vehicle that took us past giraffes, zebras, rhinos, elephants, and flamingos nestled in realistic appearing habitat. We also walked through many paths populated with animals from Africa and Asia, including fruit bats, chimpanzees, and alligators, or were they crocodiles? We saw an animal I never knew existed, an okapi, which is a member of the giraffe family, despite its zebra-like stripes. It looked like something out of Dr. Dolittle.

We ate lunch at an African buffet that served couscous, curried meats and vegetables. The food was delicious, and while we were eating, we met the princess of Animal Kingdom, Daisy Duck, who was wearing a khaki safari outfit and sensible shoes.

Not everyone is a fan of Animal Kingdom. Various groups, including PETA, protested during the planning stages of the park prior to its opening in 1998, but to Disney’s credit they have placed the wellbeing of the animals first. The park closes earlier than the other Disney sites and animals are brought inside every evening to reduce stress. No fireworks are displayed at Animal Kingdom. They are very committed to conservation and have been a leader in saving the white rhino from extinction. Apparently conservation was important to Disney’s founder, Walt Disney, himself.

Marsha and I were able to tour the building where the animals are monitored and cared for by a staff including ten veterinarians and animal nutritionists, who routinely check the nutritional content of the food with cutting edge technology.

One of the technicians was available for questions. I asked her what the most common health problem was for the animals living there. She didn’t hesitate in her reply: aging. Animals in captivation often live longer than they do in the wild due to the consistent food supply and lack of predators. They develop some of the same maladies that aging people encounter and their remedies are often the same. They get Tramadol, anti-inflammatory drugs, and other medications for their arthritis.

I know some people, less militant than PETA, who still think it is wrong to incarcerate animals for our entertainment. I definitely see their point, but I believe the zoos are important for two reasons. Facilities like Animal Kingdom that support strong conservation programs are making important contributions that are not always possible in the wild.

Also, most people aren’t going to get to Africa or Asia or sometimes even out into their own local wild areas, which are quickly diminishing, to see fascinating birds like the Fairy Bluebird and the Golden Pheasant that Marsha and I saw at Animal Kingdom. There is evidence that people will only protect what they love and it’s hard to admire animals and wildlife you have never seen. Having amazing representatives of the animal kingdom accessible helps us convince people of the importance of saving them and their habitats.

We had a great day at the park, and I am glad we went.

I now have a five-month old granddaughter and Disney has ten princesses now. They have added Jasmine, Pocahontas, Mulan, Tiana, and Rapunzel since my daughter’s childhood. My daughter, Kris, turned out just fine, despite her nearly constant exposure to the first five princesses in the Disney line-up. Perhaps she was ultimately more influenced by her grandmother, godmother, aunts and other women in her life. She notes that the nurses who competently and compassionately cared for her father after his leukemia diagnosis had a lot to do with her becoming a nurse. 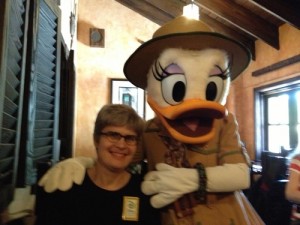 So, I guess I am less intimidated by the Disney characters these days. I admit I’ve bought my granddaughter a Disney Fairies gift for Christmas. Tinker Bell is probably the best known and their “Imagination in Flight” theme is somewhat appealing. I expect little Harper will turn out fine. She has an amazing great-grandmother, terrific paternal grandmother, stellar mother, fantastic godmother, and wonderful great-aunts all of whom will be important role models. And I am planning on telling her the stories of Rosa Parks, Rachel Carson, and Harper Lee while we take frequent walks in the prairies and woods. Who knows maybe we will come across some helpful fairies, too.

Some information for this blog was found in the following websites.