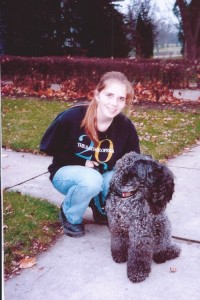 Ares passed away December 18, 2012 at the Quarry Hill Animal Hospital in Rochester, MN after valiantly resisting old age. Kris, Harper, and I were with him, along with Dr. Anderson and the amazingly compassionate staff there.

He came to us in 2001 from a kennel in Dayton, Ohio. Kris and I drove 650 miles to meet him. When the door opened and we stepped inside, Ares ran straight to Kris as if he had been waiting for her. He has been with us ever since.

Ares was originally from a breeder in the Czech Republic. The Ohio breeder bought him and then soon, rejected him as a show dog because his ears didn’t stand up acceptably. Knowing Ares’s personality, I don’t think this was a great disappointment to him. During his 11 ½ years with us he tended to be quiet and gentle. He didn’t care for car rides or being around people he didn’t know. I doubt he was cut out to be a show dog.

I was originally encouraged to get a dog by my friend Gretchen after Kris and I moved into the country. She thought a dog would provide good protection. After some firewood stacked outside our house disappeared, I decided she was right and we began a search for a dog. Because I am allergic to dogs and cats, another friend – also allergic – recommended a Kerry Blue Terrier. It took us a long time to find one since they had been the Best in Show winners at the time.

His name, Ares, was given to him by the original breeder. It is the name of the Greek god of war. This seemed like a suitable name for our new watchdog. One of the first nights he was with us, there was a thunderstorm. I was interested to see his reaction when a branch hit one of our windows. His ears perked, he stood up, and . . . jumped into my lap. He was never the watchdog we had hoped for, but he was an amazing friend and companion instead.

We learned quickly that Ares didn’t like to be confined. He broke out of every kennel we tried to put him in. He was agile, so much so that he was able to jump 6 feet high from a sitting position. When we tried to leave him at a kennel, they had to build their fences higher to keep him in.

We quickly gave up on trying to keep him in. We realized that he didn’t like being alone during the day after living with a pack of other show dogs. So we set out to acquire a companion for him. Again, we needed a hypoallergenic dog. This time we chose a Bedlington terrier: Sophie. She probably would not have been his first choice for a companion. Sophie was a dear, but a high maintenance prima donna. I think Ares decided she was better than nothing, but when she paraded around, he would just look at us as if to say, “Really?”

When Kris moved out and married Christopher, Sophie went with them. She passed away a few years ago of a blood disorder. In the meantime, a dog of unknown breeding was abandoned near our home on Highway 14 and we took him in. Due to his lack of grooming, his big head of hair inspired us to name him Beethoven.

So for the last few years, I have lived with Ares and Beethoven, canine brothers and good companions for me. Recently, Kris and Christopher’s dog Moose, a Chihuahua-terrier mix has been staying with us while they are between houses. Ares just seemed to roll his eyes. Those smaller dogs, while enthusiastic and energetic, aren’t the smartest dogs we’ve known.

All of this Ares endured with patience and grace. And then along came Kris and Chris’s daughter, my granddaughter, Harper. Ares seemed, even in these last few weeks, to adore her. He would walk up to her and peer closely and she would reach out to him. Unlike Moose, who licks her face any chance he gets and Beethoven , who literally walks across her if she happens to be lying down on the bed in his path, Ares just seemed to admire her, as she did him.

He asked so little of me. He was always at my side and slept at the end of my bed every night. He enjoyed walking around our fields. As recently as a couple of weeks ago, he bounded along the paths. He had a graceful gait when he ran.

It was difficult to let him go today and after returning from the vet’s office, I realized that he had been with me almost exactly as long as my husband, Ralph, had been: 11 ½ years before he died of leukemia. I have been fortunate to have amazingly caring companions. I only wish they had been with me longer.