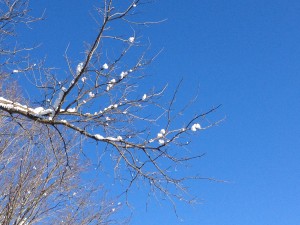 Today is a beautiful day in Minnesota. The sun is shining, illuminating a bright, blue sky. Freshly fallen snow covers trees, houses, and all open spaces with a whiteness as white as you can imagine. These are the pleasant remnants of Thursday’s blizzard.

The storm had been predicted well in advance, but it was late in arriving. We expected to wake up to a blizzard in progress, but instead there was only a cloudy, gray stillness. Some schools and businesses had already closed in anticipation, and downtown seemed deserted. People stopped moving, for the most part, staying put where they wanted to be when the storm hit. Many watched the mass of blue and purple creeping towards us on the radar screen, reminding me of the lines in Yeats’s poem, “And what rough beast, its hour come round at last, Slouches towards Bethlehem to be born?” As the storm approached, businesses and schools abruptly began closing, although not a snowflake had fallen, nor the wind stirred. Even buses were canceled. I felt like a sitting duck, but even ducks have wings they can use for a quick escape. Anyone who has lived in Minnesota any time at all knows how storms can descend suddenly. One snowflake becomes a wall of snow in minutes.

And it did descend, the snow filling the air as the wind gusted. People scurried to get home.

By morning, nine inches of heavy snow had fallen on top of snow that had fallen only days before. We had barely recovered from two storms in the preceding five days. But this storm was worse, a blizzard, and one person died. I am surprised only one person. 1,900 cars collided or slid into ditches, utility poles, guardrails, and who knows what else. Mailboxes in rural areas leaned after being pummeled by snow pushed by plows. The governor called a state of emergency and released the National Guard to help clear the roads. Power outages left a few thousand in the dark and without heat. Two days later, we are left with roads glazed in thick, immovable ice. Salt apparently doesn’t work below a certain temperature, and we have been below that temperature almost all winter. It is scary driving. I try to keep one wheel on the shoulder of the road, which for some reason is the only clear spot on most roads. Is this any way to live?

It has been a long, cold winter, and it is only the end of February. Last year, we dealt with a heavy snowfall in May. This year it seems as if it got cold around Thanksgiving and hasn’t warmed up since. The temperatures have been below zero week after week, punctuated with polar vortexes bringing wind chills to fifty degrees below zero, colder than the surface of Mars, according to one account.

My mother and I have imagined going somewhere, but we can’t think of a good place to go. The winter has been hard almost everywhere. Cape Cod has had repeated storms. There are droughts and fires in California. The national weather map is grim.

So best to stay put, endure it, and try to enjoy the beauty. But don’t be deceived. In the photo here, those puffs of white snow clinging to the tree branches like cute marshmallows are actually balls of ice. When the wind blows they plummet onto cars and people below. It’s a Minnesota winter, people. Keep your heads down!